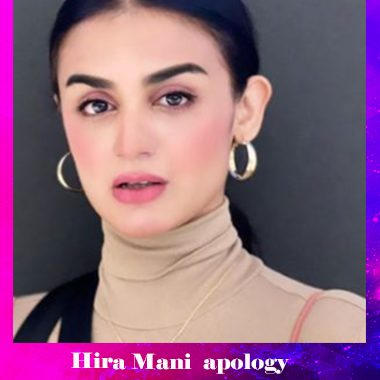 Actress Hira Mani shares apology video on Dua Zehra case. Hira Mani is known for often giving opinions on things that make people angry, she sometimes speaks without thinking and doesn’t care about the consequences. Something similar happened this time too.

Hira Mani supported Dua Zehra and Zaheer on social media and prayed that they stay together forever. But she has faced severe criticism. On Twitter, the trend of “Bungay” was run by people, after that finally Hira Mani came on Instagram and gave an explanation. He released his message in the form of a video on Twitter, crying. She said that she was in Dubai for vacation and she did not know that Dua Zehra was a young girl and it was a case of kidnapping. She apologized for her statement.

Dua Zehra’s case is three months old. After a lot of criticism from people she was forced to apologize and people liked her way of apologizing and asked her to move on. Actress Saba Faisal, Actor Muneeb Butt and Actress Sonia Hussain encouraged the release of Hira Mani apology video message and said that mistakes happen to. Fans it was said that she is the owner of a very soft and pure heart, she has realized her mistake, so she should be forgiven.

This site uses Akismet to reduce spam. Learn how your comment data is processed.

Black Friday Deals For All The Categories You Can Imagine Black Friday Deals For All The Categories You Can Imagine